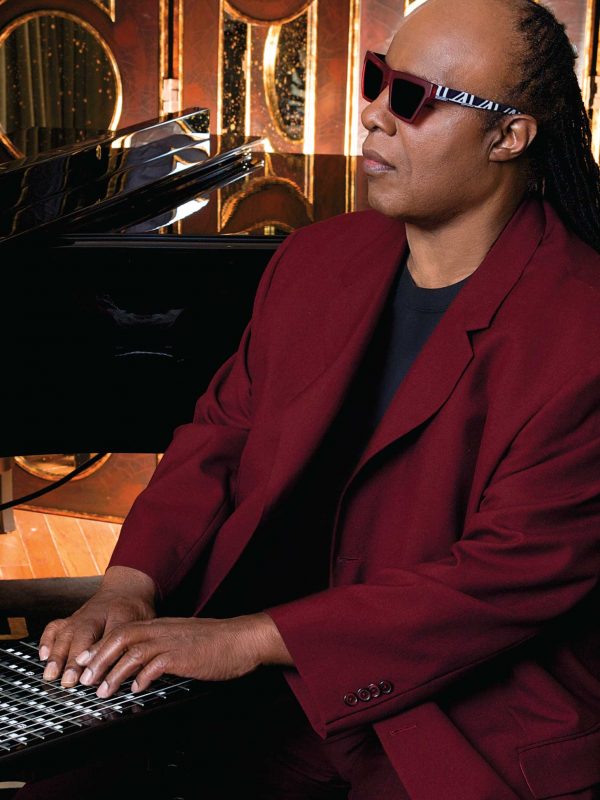 For more than five decades, Stevie Wonder has been a powerful musical force. He’s won 22 Grammy Awards and sold more than 100 million albums and singles. Wonder, who’s been blind almost since birth, is a committed advocate for people with disabilities, a courageous political activist, and a compassionate philanthropist who’s hosted the House Full of Toys fundraiser to benefit children for nearly two decades. Recently, ABILITY’s Chet Cooper and Lia Martirosyan spent some time with the legendary artist, who was named a United Nation’s Messenger of Peace. The three of them sat around his piano chatting where, occasionally, Wonder magically broke into song.

Chet Cooper: Thank you, what a great way to start an interview. The first time we met was during a fundraising event for Christopher Reeve. Do you remember the event?

Stevie Wonder: I do remember, yes.

Cooper: How did you get connected with Christopher?

Wonder: We had met some years ago, before he was a quadriplegic. At some point we had met, I think at several award shows or something like that. We said hello. I’d seen a few of his movies. But obviously I felt that he was a good person even then, and obviously the tragedy of what happened, the accident that happened, was heartbreaking. We all felt horrible for him after it. Those of us who I knew who had a disability as well said how courageous he was to continue to be able to fight for and do the best he could do with what he had and supported the various causes for those with disabilities.

Cooper: I remember it was a really interesting evening. As usual, you did a great job. Tell me about how you got involved with the United Nations.

Wonder: Actually, a very good friend of mine, Tim Francis, had been in communication with various people from the United Nations. They had interest in me being a part of the United Nations, a messenger of peace, and I was so elated, I was so excited about it, to want me to specifically be and speak for those with disabilities was an honor for me. Without question, I said yes, yes, and another yes, and yes on top of that yes, which adds up to another yes. The opportunity to be able to serve and to not only have a position about how you want for the world to be more accessible for people with disabilities as well, to be able to have a voice and to speak aloud through being a part of the United Nations as a messenger of peace. And it’s been truly an honor.

Lia Martirosyan: Have you been able to travel as an ambassador of peace yet, other than to the United Nations?

Wonder: I have traveled to the convention they had in Switzerland. The organization is WIPO, World Intellectual Property Organization. The original meeting they had, getting all the various countries to come together, and at least agree to meet and to agree that they’ll have a meeting signing for there to be more countries that would agree to making far more books available for people who were blind or with low vision. The issue was, some of the significant countries were having an issue with the various publishers, and their concern was books being duplicated, piracy and all that. But the reality is, with the technology we have today, there are ways around that. So my thing was getting the countries to the table and agreeing that they would meet, and they did do that. And a lot of the countries signed that they would work out the legislation that would make more printed information accessible and available.

[Stevie challenged the organization in 2013, to conclude the accord, promising the international negotiators a performance if it’s concluded. Stevie’s quote: “While the signing of this treaty is a historic and important step, I am respectfully and urgently asking all governments and states to prioritize ratification of this treaty so that it will become the law of the land in your respective countries and states. It is humbling to know that when the weakest among us is in need, you answered the call with a steely determination and a steadfast courage to make a difference. Today we all are brothers and sisters in the struggle to make this life and the future better, not for one, but for all.”]

Cooper: On the world peace portion of your—I guess I’ll say duties, have you been able to travel to some of the regions of the world that are having peace issues?

Wonder: Not as much as I would like to. I think that to me, the issues that we have dealing with world peace, we just need to deal with one very simple thing, and it would go away. And that is, man has to get rid of his ego. Because that’s what is the destruction, that is the destruction that would get an extremist group in Nigeria to kidnap 300 young students, females, because their position is that they feel women should not be in the Western world or literate at all. That goes to show you how people and egos get involved that have nothing to do with the God they serve. Because I’m believing that nowhere in the Qur’an or in the Bible or any other book, for that matter, that it is for the woman or for anyone to be illiterate.

Cooper: With the ego removed—

Wonder: —there’s no way we can find peace with the ego. There’s no way. It is completely the opposite of everything that spirituality, Allah, God, stands for. And until we get rid of that, we’ll only move but so far. And that’s everywhere in the world.

Cooper: I think there’s a song here about ego. We’ll start working on it.