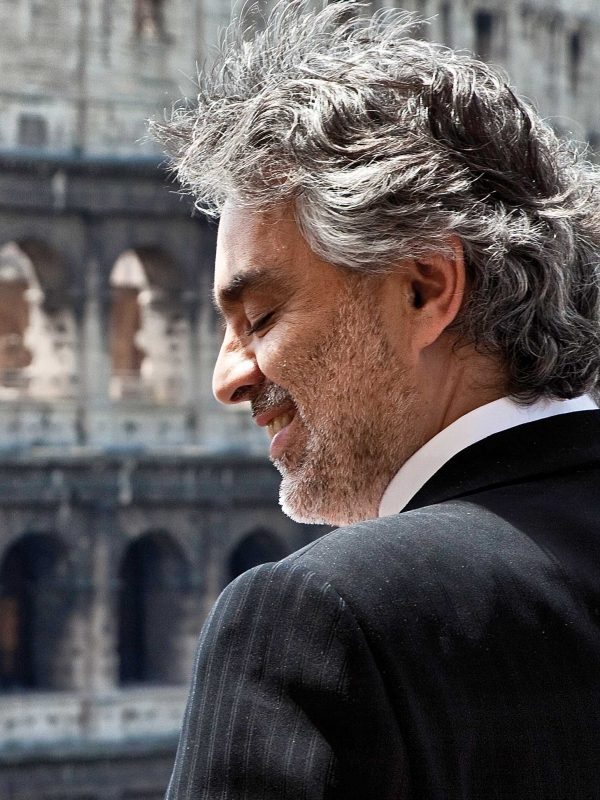 Do you remember the moments in your life that shaped the person you are today? Where is your drive derived from? Andrea Bocelli has felt a connection to music for as long as he can remember. Singing lessons weren’t handed to Bocelli, he paid for them by making money playing the piano at local bars. Luckily, his parents allowed him to study piano at the ripe old age of 6. He admits technical confidence isn’t something easily gained over night, rather, something that requires time and determination. ABILITY’s Lia Limón Martirosyan reached out to Bocelli with the hopes of getting to know a bit more about his journey.

Lia Martirosyan: Before entering the world of opera, an acquired taste, I sang a variety of genres, like the blues and oldies. But once I began training, I was hooked. How did singing enter your life? And why the classical genre?

Andrea Bocelli: Music has always been for me an unavoidable need, it is something that I have in my genes, a medicine, a way to give lightness to life. My mother said that even when I was a baby, when I listened to classical music and especially vocal music, I used to stop crying.

Bocelli: A key moment in my personal training that led me eventually to pursue the career of a tenor was the impact I had as a child with the extraordinary voice of the famous tenor Franco Corelli. It was my nanny Oriana, to give me the first record of the famous singer, who, in that case, was performing the most famous aria from Andrea Chénier by Umberto Giordano. I still remember how I ran to the old record player, I was excited while starting the record and moving to the outside of the needle. Then all of a sudden the orchestra introduced the recitative of the improvviso, Un dì, all’azzurro spazio, and finally a voice filled the pauses of the orchestra. A large and extremely vibrant voice, brimming with feelings, filled with an indescribable pain that went straight to the heart. It was a broad singing, free, spontaneous, sweet at times roaring at others, but always authoritative and dominating. Chénier, the poet [the main character of the realist work by Giordano] was addressing the theme of love in a general sense. Franco Corelli in that record seemed to deal with the subject of love for his art: the art of singing, that art capable of involving, of touching. As I said before I was just a child, but listening to that certainly marked my destiny.

Martirosyan: Beautiful. What did you start as?

Bocelli: I started as a lyrical singer; my studies’ process is the rigorous one of tenors. But when I was about twenty years of age I started to approach pop; a genre of music I did not know before, in order to face those international masterpieces that I would eventually perform in the venues where, to pay for my singing lessons, I used to play as a pianist.

Martirosyan: Do you remember the moment you felt technique was within your grasp?

Bocelli: Technical confidence was a long and difficult conquest, which I acquired with maturity in recent years. However, I have always been singing. At seven years of age I was already able to recognize the famous voices of the time. I used to listen, to learn the great arias and then I tried to emulate the great interpreters; I almost tried to compete with them. A teenager, self taught, driven by family and friends, I gave my first concert in a small village not far from Lajatico, where I was born. There was a feast and I was asked to sing. I sang with great worry. With a trepidation that has never failed, since by nature, I am emotional. In the years of my training I used to go where my heart would take me, with a youthful enthusiasm and with a bit of unconsciousness, I sang what I loved most; the great arias by Puccini, Verdi, Mascagni, Giordano, and sometimes those popular romanzas of the twentieth century that the great tenors had in their repertoire.

Martirosyan: For someone with great worry, you took on powerful composers. Who were your vocal maestros?

Bocelli: I remember with great affection my first teacher, Luciano Bettarini who had already been the teacher of famous artists such as Fedora Barbieri, Mirto Picchi, Giuseppe Taddei, Ettore Bastianini and Ferruccio Tagliavini. Thanks to Mr. Bettarini I have learned first of all the discipline of singing. A discipline that I had never imagined could be so strict, like the one an athlete must follow to get good results. But it was Franco Corelli who was the coup de foudre that marked my destiny. I have loved this great tenor, as I said before, since the very first time I listened to him. He was a legendary singer, a charismatic presence, a fantastic voice. When I was a boy, I literally used up his records. Years later I was so lucky to study with him and eventually establish a relationship of mutual esteem which on my side was of true devotion. In the field of singing a teacher is like a doctor, if you find the right one you make great progress, if you find the wrong one, you run the risk to be ruined forever.

Martirosyan: This is true.

Bocelli: I think there are two kinds of teachers. The one offering precise technical knowledge on vocalization and who helps in making the exercises useful for all kinds of sport disciplines; because the voice is always the result of the activity of a muscle, like the unforgettable Bettarini. Then there is the teacher who is also a kind of muse who will guide you on the path of emulation. Like the great Franco Corelli.

Martirosyan: Before gaining international fame, did you experience adversity in your schooling? In traveling?

Bocelli: I can say that since I was a boy I had to double my efforts, to reach the same results as my school mates. I think it has been a preparation that has strengthened me, that has made my will grow stronger and trained my spirit of sacrifice. I hope, thinking of this, that the adventure of my life, which fame has revealed to everybody, may represent a positive example, showing how, in life, there is no difficulty that cannot be overcome. This is what I try to do every day, falling and getting up, a thousand times.

Perhaps about fame, I can say I reached it very late in my life, when I was more than thirty five. Before this, I have lived many years punctuated by disappointments and by doors shut on me. In those years all the many attempts made, to get noticed in the world of entertainment, had not given any result. With a degree in law, at the age of thirty I thought that a legal career would have been a logical outcome and as time passed, the possibility of a future career related to music was getting weaker and weaker.

Martirosyan: Many of us are glad you didn’t take the logical route. Do you read Braille?

Bocelli: Of course I do, since I was a child. It was thanks to my parents who, though suffering from our separation, decided to send me to a boarding school far from home, so that with learning how to read, write and count, I would be able to cope with life in the best way possible. Even my grandmother and my brother learned how to encode Braille just to write to each other and keep in touch during the long months when school kept us apart.

Bocelli: Yes, today technology has made great strides, thanks to the latest models of Braille bar, I am always connected. I can go through my mail, easily search the internet and specifically, thanks to text to speech, I can read or listen to the books I love. In each Braille bar I keep a collection of about six thousand volumes. If in my childhood and school apprenticeship I had the possibility of such support, bettering my education would have been easier and potentially wider.

Martirosyan: Do you ever think of what you might be doing if you weren’t singing?

Bocelli: I am convinced that life offers an incredible number of other amazing things to do and that even music which is a fundamental part of my life, can be lived in many different ways. If I had not received from Heaven a pleasant and recognizable voice, a gift I have received and of which I have no merit, a talent that I have tried to honor with much study and self-sacrifice, probably today I would earn a living working as a lawyer. I do not know whether I would have reached success, but I would have surely been a serious professional and I would have loved my work.

Martirosyan: On that note, let’s talk about the politics in Italy.

Bocelli: I suppose it is not easy to govern a country like Italy, just because Italians have the remarkable quality of thinking each with his/her own head and this corresponds also to their worst fault, because they do not know how to think together, be together, play together as a team. The political class, however is nothing but the reflection of what we are. If in my country we do not all endeavor to operate a deep inner change towards morality, it will be very difficult to get an example from those who are today the mirror of what we are.

Martirosyan: Great point. Did you go through the school system in Italy?

Bocelli: Except for the boarding school which I attended as a child, my studies have been fairly regular, linear. After humanities high school, I went to University of Pisa where I got my degree in Law. At the same time I studied music privately. Actually, however, a singer never stops studying. And in this regard I must confess that this year at the tender age of almost fifty-five I am going to achieve the diploma of the top biennial course of opera singing at the Conservatory of La Spezia, where my son Amos studies piano and where I have signed up too in order to have a little more time to spend with him.

Martirosyan: That’s very sweet of you. I admire old school technique and bel canto voices of Luisa Tetrazzini, Maria Caniglia, Montserrat Caballe and Anna Nshanian, just to name a few. I know Corelli had a big impact on your life. Any other voices you like?

Bocelli: Voices like the ones of Enrico Caruso, Mario Lanza, Beniamino Gigli, Mario Del Monaco, Aureliano Pertile, Ferruccio Tagliavini, Giuseppe Di Stefano and many others, have been precious companions of my childhood and still are today. Through the recordings of these great artists I have come to learn and love Opera.

Finally, I cannot help mentioning my great friend and interpreter Luciano Pavarotti. The most important lesson I drew from his advice is about technique. He taught me how to pursue the goal to sing effortlessly, so as to use voice like an instrument capable of giving the best, without ever encountering troubles. A fundamental point, because if you do not acquire it, at my age you may run the risk to damage your voice beyond any hope.

Martirosyan: Any words of wisdom for opera singers in training?

Bocelli: I tend not to give any advice to my colleagues, because I believe that every life follows its own path, that mistakes cannot be avoided, I too have committed many. What can really be of help, in general, are advice, affection and if anything, the example of someone who is close…. continued in ABILITY Magazine