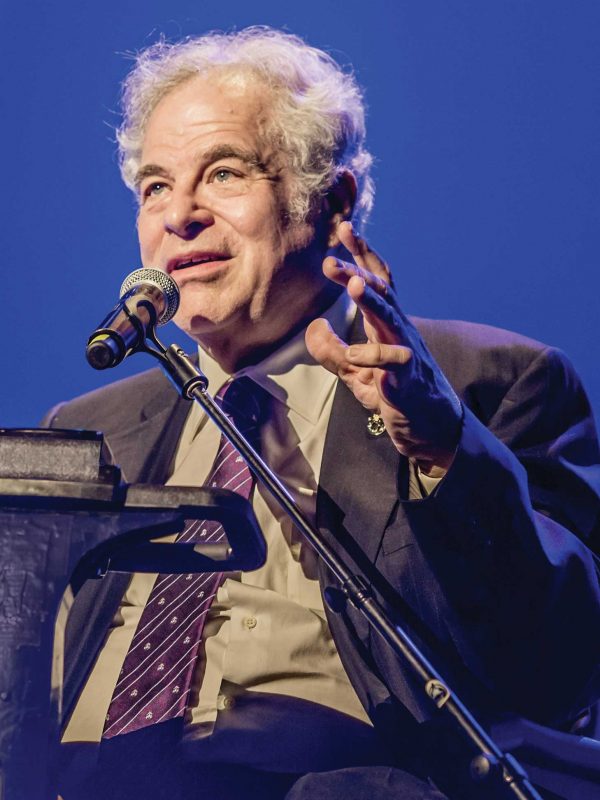 Tune in to your local classical radio station anywhere in North America, and it won’t take long for someone to mention the name Itzhak Perlman. It is rare for a musician in the classical genre to become the rock star that Perlman has become. Known for the tremendous emotion he exudes through each string he caresses, he has taken lead in dominating the title ‘virtuoso of the violin’. He has shared his journey on stage with such transparency, whether you watch him live or through his plethora of performances available online, Perlman lets you in.

As long as Perlman has been performing, he has also been educating and fighting for inclusivity for those with disabilities. Contracting polio as a young boy, he has discovered first hand the obstacles that come with navigating the world with a limited mobility, as well as the “hostility” he feels when requesting basic necessities.

From humble beginnings, Perlman knows the impact of giving. He recently was presented with the Genesis Prize, which honors individuals who excel within their professional fields, and who make significant contributions to humanity, as well as inspire through their dedication to Jewish values. With this accolade comes a one million dollar reward that, which Perlman has decided to use towards greater integration of people with disabilities into society. During his acceptance speech, Perlman highlighteds being able to give back:, “The physical prize is wonderful, but what I will cherish even more is the opportunity you have given me to make a meaningful difference in the lives of others.”

During our interview we laughed a bit, and, he shared some personal tips and tricks of travel; then, we bid Perlman adieu as he sped off to mold the skills of young talented musicians.

Lia Martirosyan: Before we begin, I want to let you know that some of the questions we probably know the answers to, we just want to share it with everyone else …

Chet Cooper: Thanks for saying that Lia. So what instrument do you play?

Perlman: (laughs) Believe me, I’ve had interviews where the person says, “So when did you start and why? What about your parents?” I say to them, “Please, have you heard of the word Google?” Anyway, that’s funny. That’s a good story. I like it. I’m going to repeat that.

Cooper: Do you know the name Millard Fuller? He started Habitat for Humanity. Are you familiar with the organization?

Cooper: Then I won’t get into the story. You’ve seen pictures of former President Jimmy Carter, building homes with—

Perlman: Yes, yes I have.

Perlman: I see. I do know a little bit about it.

Cooper: Millard and I had talked many times over the phone. Finally, I got to Georgia and meet him at his office. I knew what he looked like. He’s a six-foot-four white male. I entered his office, and there was a five foot-two African American woman. I went up and hugged her, and said, “Millard!” He stood looking down at us, a bit confused and said,“I’m Millard!?”

So he’s shared that story often. Did I just go off track?

Martirosyan: Had you heard of the Genesis Prize prior to receiving the award?

Perlman: Actually not. When I first received the call that I was being considered, I was led to understand that it was a very prestigious and fairly new award that was granted, that it was a fairly new one, that there were only two previous laureates who have received it. So for me, that’s pretty new. They call this award the Jewish Nobel, but it’s a little different than that, because this award, which entails a big money award of about a million dollars, which a lot of people misunderstand. They think that I’m getting a million dollars and isn’t that great? But with this award, you have to re-gift it to causes that have something to do with the betterment of the world, which in Hebrew is called tikkun olam.

So the award is an opportunity to be a generous person towards particular causes that may be close to you. That’s basically what it is.

Perlman: No, there’s no bad news there! (laughs) It’s just a different kind of an award. I’m being sort of a conduit. The money goes to me, and then it goes to other people. In this particular case, I feel like saying, “Forget about the money, just let me figure out who it should go to.” That’s what we’ve been doing. It’s not like awards where you sit down and somebody bestows an award on you, and you say, “Thank you so very much.” No. After this “thank you very, very much,” then the work starts, where you have to figure out whom you want to give it to. There are so many wonderful causes in the world, and let’s face it, when you talk about a million bucks, if you think about it very carefully, it’s not that much money, if you start to divide it. You have to figure out a philosophy as to whom you want to give it to.

Cooper: I think that’s one of the hardest decisions. I was joking about the bad news, but I guess if there’s anything that’s difficult, it’s how you do that. Are people stepping up to donate more? Is that part of it?

Perlman: That’s true. There is a gentleman who’s going to double the prize. I think that would be at least two million, which is good. And then there’s something else about matching. Believe me, it’s very complicated. I’m now in the process of finding out exactly what’s going on. It’s not like, I get some money, and then I give it away. It’s a little complicated, and of course it has to do with the causes. Everybody has his or her own favorite cause. I mentioned the two causes that I felt were close to the life that I lead. One of them has to do, obviously, with music, because that’s what I do. Let me tell you, in case you didn’t find out, I’m a professional musician, and I play the violin.

And the other cause, of course, has to do with people with disabilities, which is because that’s what I am. I’m a polio survivor. That’s been part of my life as well. So I told the Genesis Prize committee I would be interested in giving help to organizations that have to do with those two causes. But now the work starts.